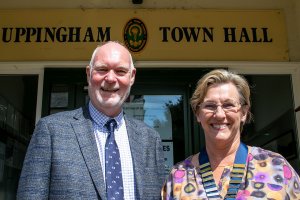 Councillor Liz Clarke was named Mayor of Uppingham on Wednesday evening at the Annual Council meeting. She has been a member of Uppingham Town Council for three years and has served as Deputy Mayor since 2020. She takes over from the outgoing Mayor, Steve Rozak, who has dedicated a lot of time and energy to the community of Uppingham.

As Mayor, Councillor Clarke will represent the town at a wide range of functions, including community, formal events and this year, HM The Queen's Platinum Jubilee. She will also chair council meetings and work towards making Uppingham a great place to live, work and visit.

Councillor Clarke has lived in the town since 2012 and is the director of her own communications consultancy. She is also Chair of Governors at Uppingham Church of England Primary School and an active member of St Peter and St Paul Parish Church in Uppingham.

The Mayor said, "It is an honour and a privilege to serve as Mayor. I'm committed to accessible spaces for all, youth provision and maintaining a safe and beautiful town for everyone. I hope to lead council wisely, actively and with creativity."

Mayor Clarke will be assisted by David Ainslie who was named Deputy Mayor at the Annual Council Meeting. Councillor Ainslie has served on the Town Council since 2011 and was Mayor of Uppingham between 2014 and 2016.

Councillor Ainslie said "It is a privilege to be an elected town councillor and to be able to represent the people of Uppingham. I am therefore especially honoured that my fellow town councillors have chosen me for the important post of Deputy Mayor, and I am very much looking forward to supporting Liz during her time as Mayor."