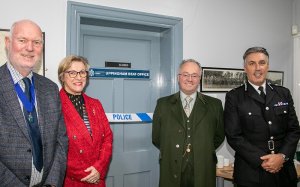 Uppingham Police officers have a new base in the Town Hall. The Police Base was officially opened by the Police & Crime Commissioner for Leicestershire, Mr Rupert Matthews and the newly appointed Chief Constable, Mr Rob Nixon. They were warmly welcomed by the Uppingham Mayor, Cllr Liz Clarke and the Deputy Mayor Cllr. Dave Ainslie. Also in attendance were the Lord Lieutenant of Rutland, Dr Sarah Furness and Rutland High Sheriff, Mr Geoff Thompson.

The new beat office is now easily accessible with a mail box right next to the Police door. It will also be much easier for members of the public wishing to speak to the Officers by observing the open and closed sign displayed on the door.